The cubism, a current of avant-garde art that began in Europe at the beginning of the 20th century as a result of the vanguards of the moment, heirs to the currents of the 19th century (1887-1964) and opens a way for many artistic trends of the beginning of the century. It, at first, developed in Paris in 1909 at the hands of Juan Gris with his paintings of some planes and volumes of a synthetic cubism with the use of collage as a recurrent method in his still life. 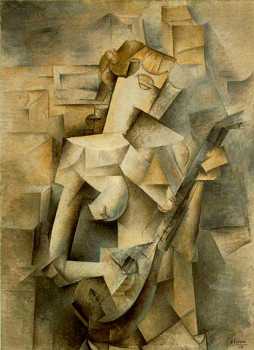 The great George Braque with his analytical cubism, and the great Pablo Picasso -disciple of Julio González- as a great genius who impregnated his time with his great work the damsels of Avignon, which marked the before and the after in the style. Pablo Gargallo who works on the human figure is also worth noting. At the Reina Sofía Museum we can find a large sample of Gargallo works, including sculptures of the entire body (the prophet) as well as one of Picasso's most famous paintings, Guernica. 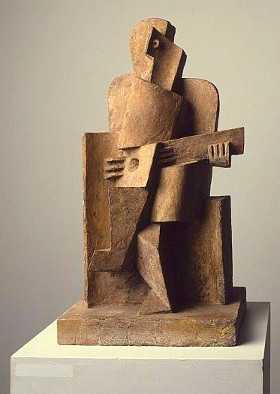 Another representative of Cubism is the artist Jacques Lipchitz, who with his Sailor with guitar, shows us a sculpture full of planes and geometry that is characteristic of analytic Cubism. One of the most prominent representatives of this current was the Russian Alexander Archipenko, the influence of the first on the later is clear.

Speaking of Cubism we cannot forget Raymond Duchamp Villon, one of the leaders and creators of trend that gives great expressiveness to the style.

Currently we can enjoy the works by Miguel Guía, who returns us to creation of works of this style again in the 21st century, cubist works, reopening the style with a very personal and current contribution.

Jacques Villon, was a French painter influenced by cubism. Born in Damville, specifically in 1875.

Many collectors decide to buy cubist sculptures that are a common predilection, since all art connoisseurs, whether private collectors, gallerists, art dealers or lovers of art, appreciate the effort to get out of the already established "istas" from Paris, who wanted to change the perception of art, like the impressionists, the pointillists and the cubists.

The latter, cubism, leads us to remember the great master Pablo Ruiz Picasso, who after finishing the art school, where he already showed a great mastery of technique, followed his own instinct, leading him to create his own pictorial language, even experimenting with a collage of photos and arriving at a point where, for the universal exposition of Paris, in the Spanish pavilion, he dominated his cubist language, and after an insistent petition, he relied to the bombing of Guernica to create his famous pictorial work "Guernica" icon of the cubist movement.

Investment in art is another relevant factor in the purchase of works, whether Cubist or other styles. The case of the skeptics who criticized Constantin Brancusi's series of sculptures, known as Bird in Space, were in an uncomfortable situation, when in 2005 they sold for 27.5 million dollars.

In the world of artistic languages, poets and sculptors sometimes speak the same language, as is the case of Jacques Lipchitz, for whom stringed instruments, such as the guitar, were part of the inspiration and connecting with Juan Larrea who wrote one of his poems in the form of a cello

Auguste Rodin marked his way into Impressionism, when Picasso was still trying to gain a foothold in the art market, through the art dealers in Paris and accepting commissions, Rodin and his drawing of the human figure, through the Thinker already achieved that our minds were able to recognize those to be drawings of a person, with his impressionistic language.

The cubist sculptures try to reflect several visions of the same figure from several points of view. In history, although not thinking about achieving this precisely, we can see how this resource was used, (rather a lack of perspective) in African art. It is here, where we see wood carvings or drawings in which the same object is seen from different angles simultaneously.

It is evident that both African art and pre-Columbian art served to the artists who created the Cubism as the spring. For example, in Picasso his inspiration in African art is very noticable. We cannot fail to see reminiscences of African drawings in his cubist sculptures.

The word Cubist comes from the derogatory term used by the French critic Vauxcelles. This one, defined "cubist" as the cube superposition. Both in drawings and cubist sculptures.

It was the first vanguard that broke with all the previous, giving a very different vision to the realization of a world with a totally new approach.

The Damsels of Avignon (Moma in New York) by Pablo Picasso, is an icon of Cubism. This work has been interpreted as the beginning of cubism. Within the cubist sculptures, we can also stress the significance of Picasso’s self-portrait.

Juan Gris, mentioned at the beginning, also a spaniard, developed a great pictorial work being seen as one of initials of cubism. Although he did not delve into cubist sculpture. He continued to develop his style through his pictorial art.

All this was developed in France (Paris) in juxtaposed stages, between the years 1907 and 1914. A period rich in breaking away from the molds and ties of classical art, as it was known until that moment. Although not until Picasso, that the Cubism becomes a worldwide and recognized movement, both in painting and sculpture.

In our Buysculpture Art Gallery, we can see our sculptor Miguel Guía, who set out to open the cubism window again. To do this, he modeled large cubist sculptures in the late 20th century and early 21st century. These sculptures show a new Cubism, without stopping taking from the same fountains that the first Cubists in Paris took.