Probably, when thinking of Street Art, the first artist that comes to our mind is Banksy. When we wish to buy urban art, we all like to be able to recognize all the winks and references made by the artists and to this end we choose art that fits in with us and our tastes. The Graffiti collection by Miguel Guía, who starts by making references in his sculptures of children with metallic balloons to Banksy and Jeff Koons, is a perfect example. 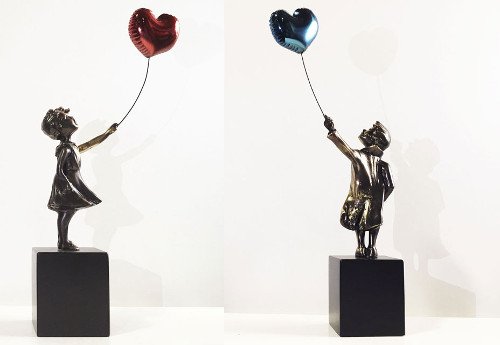 Guía, created these sculptures of children as a nod to "girl with balloon" a girl that the British painted and which was destroyed at the Sotheby's auction house in London, as part of a performance by the artist himself, in response to the art market.

Banksy is a pseudonym, is by which the mysterious artist of British urban art is known. However, there is no reliable information about his exact identity.

The only reference of Banksy, is his appearance in the documentary called "Exit by the gift shop", which does not exist, and from which biographical data can not be extracted.

To buy Banksy paintings in Serigraphy or to buy Banksy sculptures, today you have to go to large galleries of international renown.

The artist, it is claimed, does not put his art on sale, but instead it is the galleries that are make deals to obtain and sell them. Even to acquire the properties in which the original work by this British artist is included, to later extract the wall and display it in galleries and fairs around the world in order to sell it.

This artist references to Blek le Rat, a French artist who was the forerunner of the style, and who 20 years before this British graffiti artist, already painted graffiti in the same style and transmitting the same message as Banksy.

Xavier Prou (Blek le Rat) is a Parisian graffiti artist, who has been painting his work in the streets of Paris since 1983.

The Street Art in Madrid, has a referent: Muelle (Juan Carlos Argüello Garzo), who was the pioneer in Spain of graffiti based on a signature or signature with an arrowhead ending, without a doubt one of the local Madrid style identifications, being this icon of the urban art of Madrid. 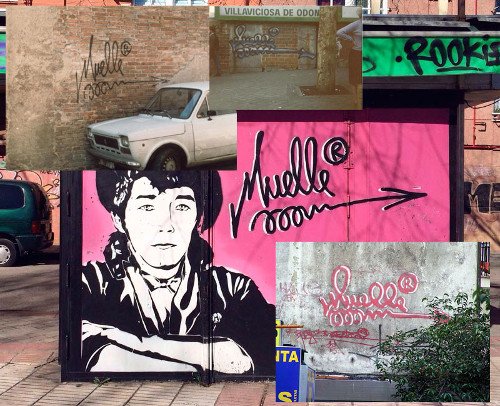 If we talk about street art paintings, they contain a jocular, sarcastic style with a great deal of satire. In the 70s of New York, graffiti had experienced a boom, going from being urban art of stylized text painted with spray to evolve into murals more centered on images, recognizable and with socio-political contexts.

A majority of the artists of street art continue today with the tradition not without controversy, based on creating guerrilla art outside of laws and regulations.

Owners of properties, far from denouncing these practices, previously considered this type of art a vandalism and a marginal art form and had little appreciation thereto, now it is the owners who commission these works of urban art as decoration of properties, both outdoors and indoors.

If you are an admirer of the style, here you will find the fantastic selection of urban art sculptures.

In our Buysculpture art gallery, we have created a compilation of works by our artists, which represent to the Street Art style, so you can buy sculptures of urban art.