Born in Madrid, he lived from day to day in his father's artistic reproduction workshop, worthy of the museum of decorative arts.

The future artist, grew living in a world of art around him. Observing work and modeling by many sculptors of different styles, in which cubist sculptures were created, following in the footsteps of Pablo Picasso. Also inspired by Juan Gris and his synthetic cubism, with tendencies based on the sculptural style of Julio González and Georges Braque, some of the initiators of Cubism. Picasso was a lover of the bullfighting world and it is reflected in his work, being a great follower of the bullfighter Enrique Ponce.

In the family art workshop, Guía learned all the modeling techniques practicing with sculptures of face, experimenting in the workshop with his abstract sculptures and sculptures of meninas, which he reduced to Cubist plans and volumes, inspired by Velázquez's menina. In this recent work of his, he gets inspired by Antonio Azzato to create his urban exhibition project called Meninas Madrid Gallery. 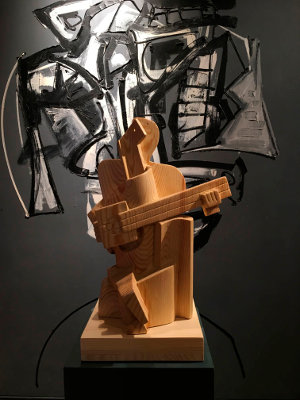 Immersed in a family environment in which Miguel models, paints, designs and where everything comes together to develop a creative spirit and a special sensitivity to beauty in all its forms of expression.

During his student times, he modeled in his studio with his friend and renowned artist Martín Duque, with great skill and talent for impressionist and realistic sculpture. Duque was a student of Antonio López, who, with his magical realism, is one of Madrid's most successful and recognized realists worldwide.

Among the animal sculptures there is the Cubist Guernica Horse by Miguel Guía, which could share characteristics with the work made in the 19th century by Raymond Duchamp Villon but which is clearly influenced by the painting "Guernica" by Picasso. This work transmits incredible strength.

He also coincided in gallery exhibitions, for several years with his friend Pedro Rodriguez, Pedrin. An artist with of international recognition since the appearance of his work "Proud Bull" in the film "Night in the museum 2", a film that catapulted him to fame, resulting in invitations to exhibit in galleries across the pond, in the United States, from Los Angeles to New York. 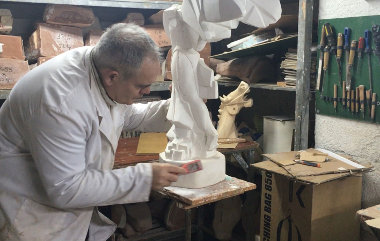 We can admire in Miguel Guía several stages in his always integrating evolution, in which continuity is not lost nor previous achievements are ruled out but instead they remain and continue to bear fruit in parallel with the development of new styles. Like the Magic Figuration, where according to the artist, he plays with figuration, giving it all the possible movement, for this occasion and playing with the possibilities of 3D design. Or the Cubist Abstraction, which according to the artist; arises from his way of understanding cubism, from different approaches, creating a unique and personal stamp that will have a long journey and different languages. Which to this day are a success among private collectors around the world.

The sculptures of Miguel Guía manage to provoke emotions in everyone who contemplates them. Why? Because their expressiveness is so great that it is impossible to remain indifferent to them. As the artist states: "my works are directed at people, at their feelings and their emotions." This is very palpable in his sculptures of children that later evolved into sculptures of hands and sculptures of faces and leading to a marked and recognizable style in his realistic sculptures, such as Calm and Silence or Reflection, modern bronze sculptures with great realism, playing with the breaks reminding us of the Japanese art of the "kintsugi", work open to the thought and reflection of those who observe it. The kintsugi is the practice of repairing ceramic fractures with varnish or resin sprinkled with gold. 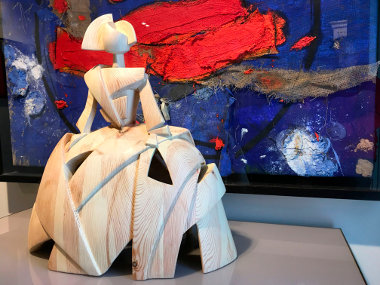 One of the latest languages of Guia is the "Spherical atomization", and in his first work, he is inspired by the Gates of hell of the Divine comedy of Dante, where originally is located the Thinker of Auguste Rodin, creator additionally to the statue known as "The bronze age" or the sculpture of Paolo and Francesca. The Thinker, from which the idea for his first work from this collection was born, with an aesthetic finish that some might consider as bearing a strong resemblance to the Balloon Dog by Jeff Koons.

In the recent years the inspiration of Miguel Guía shares space with the sculptures of Antony Gormley, British sculptor born in 1950, author of the Angel of the North, the Infection or the Horizon Field, which explores the relationship between the human body and space. This artist makes sculptures of men, also known as anthropomorphic, works that he bases on his own body, scanned in 3D. Concept that shared by Guia, for his work belonging to the collection "Three-dimensional Pixelization" of his Cubist Abstraction language with the difference that Guia does not use his body, scanned in 3D as a base.

Guia's creativity has led him to create commissioned works, including the archery world cup in Las Vegas, the trophy for the FITA world archery championship and the prize of World Annual Day against pain organized by SED, among other big commissions. The Guia’s works are perfect as gifts of sculptures and corporate sculptures.

It is the case of his "Harmony of Samothrace", which is clearly influence by the great Greek sculpture, which we can see in the Louvre Museum in Paris, the Victory of Samothrace, also known as the goddess Nike. A sculpture that in the hands of Miguel Guía charges a very special presence.

In some of the works of Guía we can recognize works of the artist Lorenzo Quinn and his sculptures of women and men, sculptures of the human body whose referent could be Pablo Gargallo and his work the Prophet.